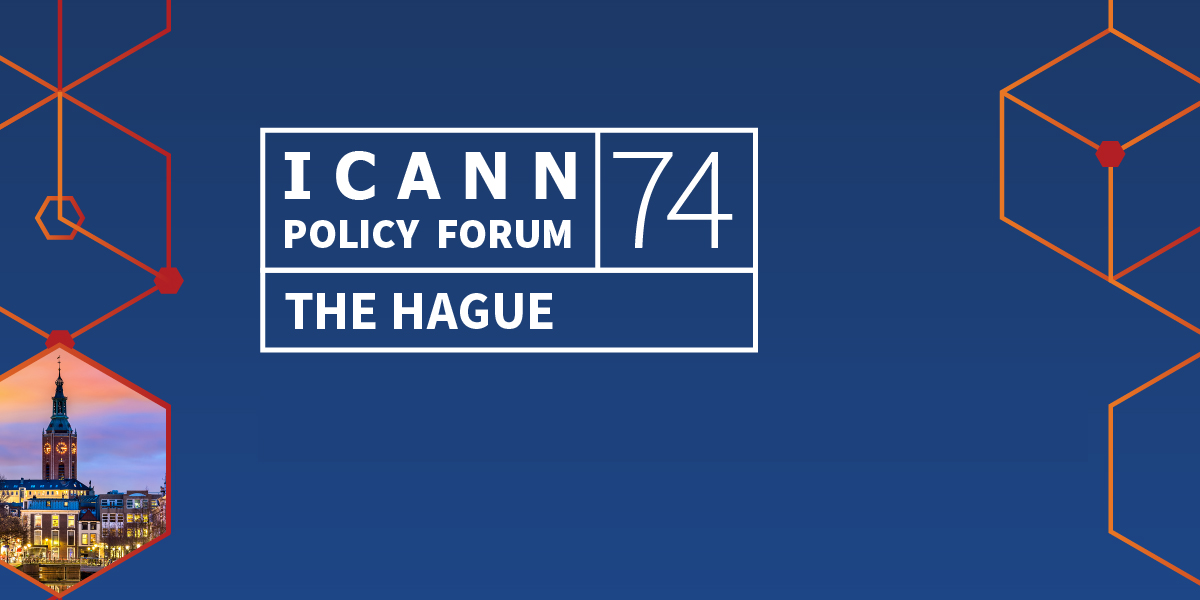 Between ICANN66 in Montreal, Canada and ICANN74 in The Hague, Netherlands, thirty-two months and seven summits will have passed exclusively online. In 2020, the prospect of a return to face-to-face meetings was already being discussed under the heading of ‘hybrid mode’, a mixture of face-to-face and remote meetings. The question remained as to when this could be implemented. A more favorable health context was needed, with all the questions posed by covid variants and its repeated waves, and sufficient guarantees of security for the participants, who generally come from the four corners of the world. The 74th edition, which was held last month in The Hague, was finally chosen to experiment the ‘hybrid mode’.

A return to face-to-face sessions in The Hague, but nevertheless extremely constrained, due to health security. Pre-registration was compulsory for all sessions, with a limited number of places per session. This meant that some sessions were already fully booked well before the summit. The compulsory pre-registration led participants to pre-register for sessions they were not sure they would attend in order to reserve a place. Each participant also had to be able to prove that their vaccination status was up to date. Tests were provided on site as well as temperature taking. Finally, masks and distancing measures were mandatory, hence the limited number of places per session. The organization also decided that everyone should go through the video conferencing medium, including those present on site, an idea that aimed to ensure that all participants could interact equally. For those connected remotely, it was also noted that, as promised, the organization planned shorter sessions, generally not exceeding one and a half hour and very often even one hour. The conditions were therefore met to guarantee safe conditions for those present and good conditions for those connected remotely.

The subject of the next series of new generic extensions has been discussed in sessions of various bodies. The project is now in the Operational Design Phase (ODP), which consists of an assessment of the risks, tasks and resources required, and which is to be concluded with an Operational Design Assessment (ODA). A related subject, that of closed generic extensions, has entered a new sequence. The principle of a so-called “Small Team”, which includes representatives of the GAC, the body representing governments, the ALAC, which represents end-users, and the GNSO, the body in charge of generic policies, has been validated in order to discuss this subject and see if a compromise can be found to envisage next steps. In the 2012 round, it was not possible to create such extension models. The question is therefore whether such extension models will be possible in the next round. Regarding the ODA, the GNSO, which estimates its publication on 31 October, has mentioned a possible postponement of six to eight weeks due to another ODA that is also mobilizing many people on the creation of a Standardized Domain Name Registration Data Access System for legitimate purposes. The SSAD ODA with contrasting conclusions, particularly with regard to its number of potential users and its particularly high cost, was delivered on 25 January. Its findings are still being evaluated. The next step on this second subject is the creation of a sort of prototype called “SSAD Light” which could be based on technologies mastered by ICANN teams to limit delays and costs. The latter would help to validate or not the implementation of an SSAD with, in this case, a prior implementation phase.

Among the many issues currently being examined, the accuracy of domain name registration data is an important one for Europeans. Indeed, it is the Regulation on the Protection of Personal Data, the GDPR, which has prompted ICANN to call for the removal of personal data from registration directories and which, in turn, explains the aforementioned SSAD project and the accuracy of data. How can we ensure that masked data is accurate?  In October 2021, a Scoping Team began a mission to evaluate the obligations related to the accuracy of registration data. It planned to verify the effectiveness of the accuracy of the data. Their findings were expected in June, but the measurement of effectiveness has been hampered by the difficulty of obtaining the necessary data, which is stored at the registrars. Transmitting all registration data to ICANN for research purposes requires a legal basis. The Scoping Team is thus put on hold.

This is particularly important because, as EURALO, the European part of the At-Large body representing end-users, has pointed out, Europe is about to adopt the NIS2 Directive. The directive is due to be voted on in the plenary session of the European Parliament in September before being published in the Official Journal and transposed in the 27 European states. EURALO recalled that NIS2 provides for specific obligations notably on domain name registration data, storage, access and verification and therefore interferes with the role of the regulator ICANN. Moreover, if specific measures apply only to European providers, this creates a disparity of obligations between players, not to mention that the transposition of the text could be unequal in the states. Accuracy at the ICANN level can help harmonize future obligations for all players regardless of their location.

The impact of regulations and disasters

At ICANN73, which followed the outbreak of the conflict in Ukraine, ICANN had the good idea of creating a session dedicated to geopolitical, regulatory and legislative aspects. This meeting highlighted the risks of fragmentation of the single Internet model advocated by the organization. This meeting was repeated at this summit and allowed to note that the initiatives of the States are increasingly interfering with ICANN’s role as regulator.

EURALO had the good idea of completing this panorama with a session on governance and multipartyism in times of emergency. This session consisted mainly of a round-up of At-Large representatives from different continents. The representative from Ukraine logically started the session. In a moving speech about the tragedy in her country, she reminded us that the Internet infrastructure in her country has been heavily impacted. For the Asia-Pacific region, the representative mentioned the volcanic eruption in Tonga in January 2022, which cut the submarine cables and caused a five-week blackout on the islands. She also mentioned the situation in Myanmar where the Internet has been cut off since a coup in February 2021. The representatives of the two American continents spoke of natural and climatic disasters such as Hurricane Maria in Puerto Rico, which had knocked out telecommunications antennas and the electricity network. For part of the population, electricity and Internet access had been cut off for several months. Finally, the representative of Africa recalled that today at least 60% of Africans do not have access to the Internet.

The return to face-to-face meetings was not an easy task for ICANN. While many participants felt that the proposed framework was too restrictive, it seems that the organization worked quite well overall in allowing everyone to attend the sessions fairly. The protection measures also seem to have dissuaded many participants from coming, including the speakers scheduled for the week of exchanges who assumed to participate remotely. Indeed, the figures given by the organization indicate 1817 participants from 101 countries, half of whom attended remotely. A good point for the planet but the limit was the possibility to interact outside the sessions.

On the ongoing policy development and review processes, the sessions during the week of the event reminded us that there are a lot of issues being dealt with in parallel, undoubtedly too many issues. This inevitably makes it difficult to keep track of them and causes delays, such as the two ODPs being conducted simultaneously on SSAD and the next round of new generic extensions. However, the overall feeling is that the topics are moving forward, even if the finish line is often unclear.

The last day provided a break from policy issues as geopolitical and regulatory issues and the impact of disasters reminded us that the governance model and access to the Internet are two particularly fragile critical aspects. While NAMESHIELD offers you solutions to the risks associated with compromised names and malicious registrations, we must also remember that we are not all equal when it comes to accessing the Internet. In addition to stricter legislation, other risks such as armed conflicts or climate change must indeed also be considered.