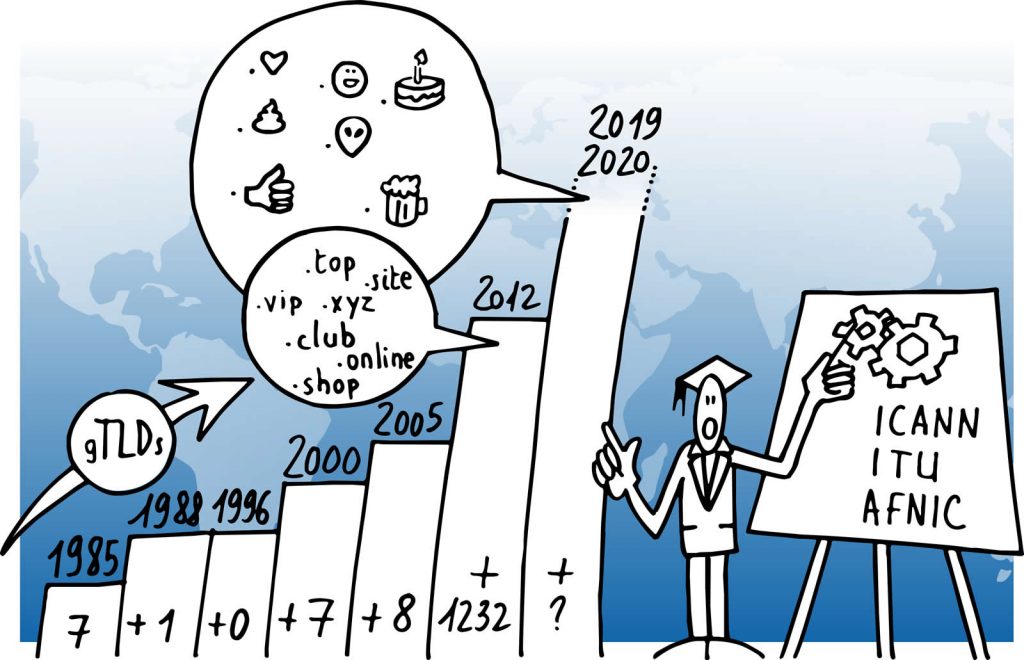 As 2019 begins, we make three wishes corresponding to an eventful year.

1.A better awareness of the Internet governance.

The main project at the time of international relations, fake news and voluntary disconnection from the Internet: the Internet governance should be at the table of the diplomats, political decision makers and strategic decision makers. France, which shines in the embassies’ world, should be able to take part in the digital decisions. The appointment of Henri Verdier as Digital Ambassador is a good thing, hoping that his knowledge in the private sector will be an absolute strength in his projects for France. France should be interested in the functioning of ICANN, the authority of world regulation of the IP addresses and the domain names. ICANN is recently the subject of strong criticisms regarding potential insider trading. The American desire to entirely privatize ICANN by suppressing its links with NTIA needs everyone’s attention.

2. ICANN decided it: a new opening of the root will soon be done. What temporality? That is a mystery. In the meantime, and so as to prevent that the list of the abandoned extensions does not cease to develop, new uses of the new extensions, whether they are opened (.PARIS, .FOOTBALL, .ICU…) or closed (.MMA, .LECLERC, .BCG…) should be found. Today (and tomorrow) the brand protection through a TLD’s possession is a definite advantage in front of the large number of opened extensions.  A TLD’s possession can also allow the opening of the scope of possibilities, like .BEST will announce at Namescon at the end of the month (surprise!).

3. The third and last wish, to anticipate the new uses of domain names. While the progress curve of the domain names’ volume increases less than previously, the focus should be on the issue of communication on the Internet. It appears as necessary to propose the registration of all possible domain names one can imagine. This is the consortium Unicode, an American entity which decides which character can be integrated in the IT standards. Let’s follow the evolution of the integration of the characters integrated in the Unicode to identify the future domain names trends. The internationalized domain names were a real positive evolution for web users around the world, myself the first concerned, having an accented first name.

Thus it’s very likely that emojis and other special characters will become the stars of the upcoming extensions. Soon the .♥.

These three wishes are part of our work at this time.

For example, our participation in the updating of the methods regarding intangible assets’ financial and extra-financial valuation of the Thesaurus Capital Immatériel by the “Institut de comptabilité de l’immatériel” (Intangible accounting Institute), aims to answer to the need to acknowledge the domain names’ value by financial managers.

Domain names are the first assets held by web users. We are fully aware of the responsibility associated to their management, and our recent developments in terms of operational excellence (ISO 27100) are the new guarantors.